The other evening right before we went in for the night we noticed Autumn acting a little odd. We watched her for a little while and nothing happened. Alpacas are so stoic and they can hide any kind of symptom really well so we decided to stick around. After a few minutes she went to the potty pile and all of a sudden a leg popped out. Something didn’t seem right so we checked her immediately and Dave found another leg. So were’s the head? He searched and couldn’t find one but he did find the tail… this alpaca baby is coming out backwards, it’s breech!

Since the back legs were already out we knew we could go ahead and help her deliver the baby in the breech position. It’s not easy but Dave delivered a breech cria before when the legs were tucked under. In fact it was the same mom… poor Autumn two breech babies in a row!

By now the sun went down and it was getting dark. Dave was finally able to pull the baby out. I thought he was dead but much to our amazement this little boy was still alive and what a live wire he turned out to be! He couldn’t wait to get up and start nursing. In fact he was even trying to run!

Well it’s another boy but I thank God he’s healthy. We decided to name the two boys after Jay’s two sons. Jay works for us and he’s a good friend too. Puccini’s baby’s name is Jordon and Autumn’s baby will be called Davan. Davan’s sire is Riccardo so this boy should turn out to be awesome. He has perfect conformation and awesome fleece so he looks like he’s off to a great start!
Share 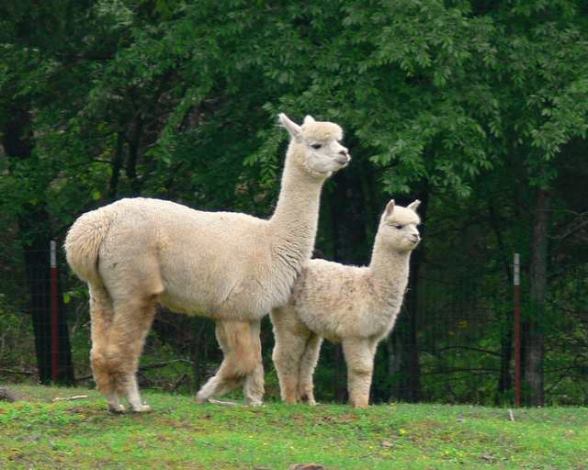